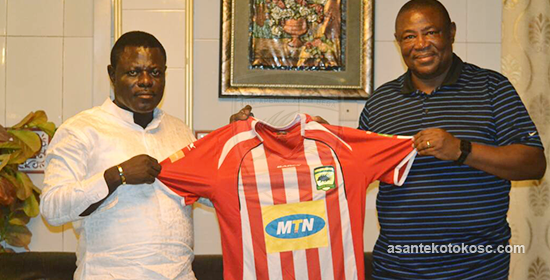 The former forward has made a damming allegations against the re-appointed manager, insisting he took bribe during his first stint with the club

According to the one-time poster boy of the Kumasi giants, Fabin’s selection was influenced on several occasions through bribes and that led to a player mutiny against him, which finally brought his sacking in 2010.

The former Heart of Lions boss was confirmed as the new manager in a one-year deal to replace Steve Polack after the club’s elimination in the preliminary round of the Caf Confederation Cup by Congolese side CARA Brazzaville.

“I don’t think the sacking of coach Steve Polack is going to solve the problems at Asante Kotoko because the playing body is also largely part of the woes,” Poku told Silver FM.

“I understand that humans can change [from worse to good and vice versa] but Fabin is not a good coach.

“Paa Kwesi Fabin takes bribe a lot and his selection of players is easily influenced through that. This is because I remember during our time with him at Kotoko, and even during my school days [at OKESS], that was what he was doing,” he said.

He added: “He always receive bribes to pick players and that’s the gospel truth. I even orchestrated his sacking from Kotoko.

“I remember there was a game which Alex Asamoah was aware that he will start because he was part of the team’s preparations throughout that week but he was eventually not used. Rather, Fabin opted for Baffour Gyan who only arrived in camp a day before and that brought confusion.

“Asamoah questioned that decision and the coach told him he won’t play in his team again so I reported it and that brought about his exit.”

AshesGyamera understands that Fabin has been tasked to win the Ghana Premier League and defend the FA Cup title won by Polack, as well as develop young talents for the club.