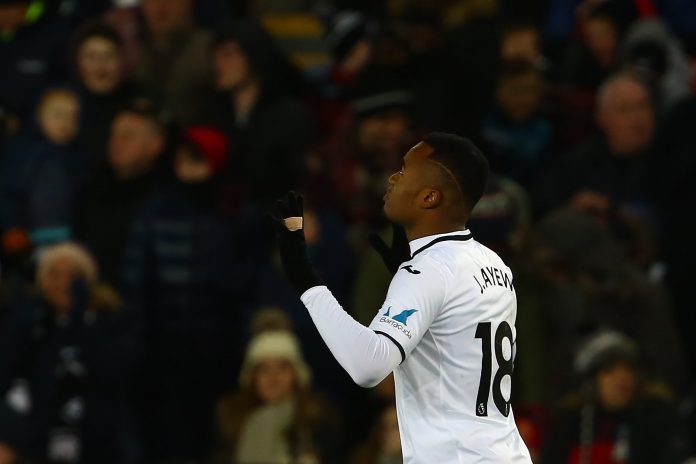 Ghana striker Jordan Ayew once again scored to underline why he is regarded as the most in-form Ghanaian forward in Europe this season when Swansea City defeated Sheffield Wednesday 2-0 on Tuesday to make it to the quarterfinals of the FA Cup.

Following a pulsating first half, which had Jordan Ayew on the bench and his senior brother Andre cap-tied, both Swansea and Sheffield failed to hit the back of the net despite several chances coming their strikers ways.

However, it took a moment of brilliance from substitute Jordan Ayew to give hosts the breather by the 55th minute. Tom Carroll saw his powerful shot ricocheted off both posts but Ayew kept his cool to calmly tap in the opener.

Nathan Dyer then sealed victory for Carlos Carvahal’s men few minutes later, after he latched on to a fine pass from Tammy Abraham’s pass before sending in a powerful through the legs of the onrushing goalkeeper’s legs.

“I am very happy and very proud of my players [especially Ayew],” Carvalhal said.

“I am happy we have achieved this. Now we will play either Rochdale or Tottenham at home and we could go to Wembley, so we are in a very good position,” he added.

“I have ‘Carlos had a dream’ written here in my jacket,” he explained, when asked if he will cut shot his players’ celebration in order to concentrate on their Premier League relegation battle.

He added: “The main competition for us is the Premier League, but we will have a week to prepare for the quarter-final, which is important, and we are near (to the end of the competition) now.

“We have 90 minutes to try to get Wembley so let’s see what happens.”