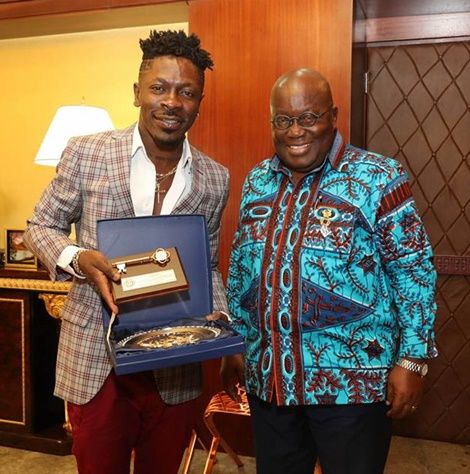 Ghana’s dancehall king Shatta Wale has wished president Nana Addo Dankwa Akufo-Addo a happy birthday on Thursday and has given him an official invitation to his newly acquired house.

H.E Akufo-Addo, who was born in 1944 turned 74 years old and Shatta Wale wants to treat him and several diplomats to a live band at his $550,000 Ship House which was bought for him after signing onto Zylofon Music label.

Happy birthday @NAkufoAddo..abeg adey invite you and your team to my Zylofon Ship house for a 20mins live band performance….PLEASE DON'T SAY NO pic.twitter.com/GS6QWTtLqG

It can be recalled that Shatta Wale’s biggest rival Stonebwoy recently labelled him as a comedian who can’t do a live performance for ten minutes but the former wants to use this opportunity to refute such claims.

Shatta Wale is highly tipped to win the 2018 VGMA artist of the year after releasing several hit songs including Ayoo, Starboy, Takin Over, Umbrella, Bulletproof, Dem Confuse and Forgetti.

He recently returned from United States after shooting his first music video under Zylofon Music and has released a latest dancehall tune entitled Caesar which has started earning air play on several radio and television stations across the country.