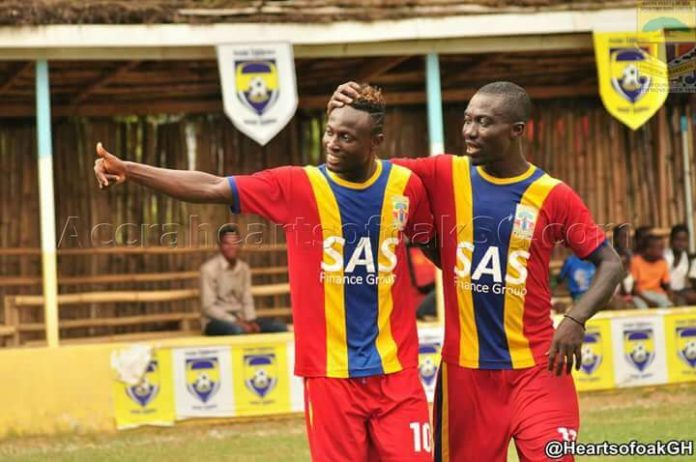 The former Phobians poster boy has launched a scathing attack at the club, insisting that it will collapse soon unless they appease him

Former Hearts of Oak midfielder Bernard Don Bortey has cautioned the club’s top hierarchy to pay him his outstanding salaries and bonuses dating back to 2004.

The 36-year-old winger, who is currently without a club, says he needs money urgently to save his dying mother but, the Phobians management have turned a deaf ear to his regular notice to their office.

And according to him, Hearts will be relegated soon and later collapse if they continue in that tangent while his mother continues to suffer on the sick bed.

“I can’t lie against Hearts of Oak, they owe me ¢7,000 and must pay me before my mother dies else something terrible will happen to the club,” Bortey told Otec FM

“If they they don’t owe such an amount, they should not pay the money and see if they can win the Ghana Premier League or survive relegation and collapse. What I’ve done for them, no player can do that in recent times. What Shamo Quaye did for Hearts of Oak, I came to continue and nobody has been able to better it since,” he said.

He added: “They want my mother to die and buried before they pay me the money but it will not happen like that, although, I regret not joining Asante Kotoko. I believe things wouldn’t have been like this if I took that chance in the past.”

Hearts are without a major trophy since 2009 after they last lifted the premier league title. Currently, there seem to be a little confusion after head coach Frank Elliott Nuttall was suspended indefinitely with rumours suggesting that he fell out with his backroom staff.

Bortey was part of the squad that won the 2004 Caf Confederation Cup title after defeating bitter rivals Asante Kotoko in the final.