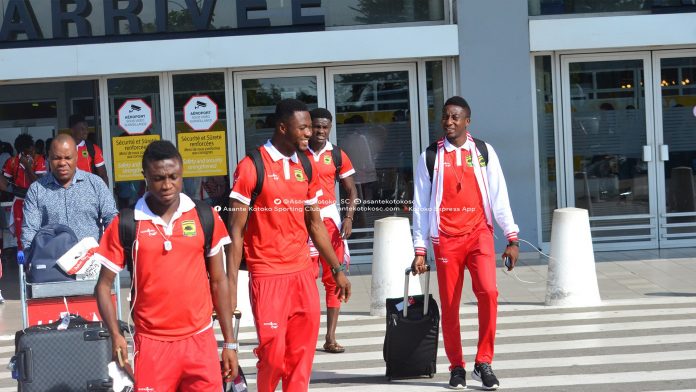 Asante Kotoko arrived in Koforidua on Sunday to continue their pre-season ahead of the start of 2020-21 season.

With the Porcupine Warriors billed to participate in Caf Champions League aside Ghana Premier League and FA Cup, coach Maxwell Konadu took along with him 23 players including two goalkeepers to fine tune in order to meet expectations.

The club’s captain Felix Annan joined his teammates on time for the trip hours after being adjudged 2019 Best Local Player by the Sports Writers Association of Ghana but he will have to compete Kwame Baah for the starting spot after losing his position a couple of months ago to the latter.

Former Atalanta defender Patrick Asmah who joined Kotoko recently made the trip as well as young striker Osman Ibrahim, who impressed the technical team during his loan stint with King Faisal.

Although, midfielder Augustine Okrah was reported to have picked up a knock at training on Friday morning, the former Al Merriekh star passed late fitness test and was included alongside Mudasiru Salifu and deputy captain Emmanuel Gyamfi but there was no Mathew Anim Cudjoe since his contract has expired.

AshesGyamera.com understands that Kotoko will likely tour Europe, Asia or some selected countries in Africa before the season commences.