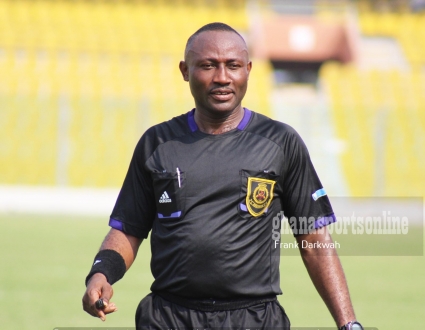 The ‘controversial’ man was found guilty of awarding a dubious penalty to Ebusua Dwarfs in their matchday one game against Berekum Chelsea at the Cape Coast Sports Stadium.

“The committee after a careful and critical study of the video clip concluded that, you, Referee Samuel Sukah awarded a bad penalty against Berekum Chelsea FC,” a statement sighted by AshesGyamera said.

“Your position on the field of play was such that, you could not have clearly seen the infringement as the distance between you and the action spot affected your judgement. Your defence at the committee’s meeting was unsuccessful and cannot be taken into consideration.

“After a thorough evaluation of the report of the Match Review Committee, the Executive of the GFA hereby approves a suspension of eight official matches of the GFA, for you, Referee Samuel Sukah,” the statement added.

Sukah has become the second referee to be suspended within four weeks after former Fifa referee Reginald Lathbridge was slapped with a lifetime ban following a crucial error he made while writing his match report in a game between Elmina Sharks and Bechem United.

That error delayed the kickoff of the 2017-18 Ghana Premier League season since Great Olympics wanted to take advantage of it and survive relegation as a result.

Also, AshesGyamera understands that match commissioner C.W Okai who was in charge of the Dwarfs-Chelsea game has been handed eight-match ban for failing to capture Sukah’s poor performance in his report.