So today, I met one of my former students at the magazine and eventually, he was the one that worked on my car.

Here is David Amponsah, a 10-year-old boy who has opted to be a mechanic, since he says he does not like the idea of waking up early to rush and be seated at one place for almost eight hours with only Forty-five minutes break (30 minutes in the morning and 15 later in the afternoon).

David stays just opposite my house and used to ran errands for me until recently, that he stopped checking up on me after school.

So last month, I asked about him in school and the younger brother told me he had gone to their mother in the village because he says he won’t attend school any longer since, no matter how we pamper him, he is not happy to be there.

A fortnight ago, he saw me coming from my house and took to his heels. Later in the evening, luck eluded him as I was going to buy some stuffs from a shop nearby. I advised him to come and promised to pay his examination fees, buy new school uniform and shoes for him and although, he initially budged, he didn’t come as promised, not knowing he was already an apprentice somewhere.

Today, I went to change my car’s engine oil and bumped into him. Interestingly, the shop is for his uncle and I had a little chat him about his nephew — “He is very good with the machines only few weeks that he had been here,” the Uncle said.

“I asked him to choose between this and education and he insisted he wants to be here, so we’ve all agreed to let him pursue his dreams since being here will in a way prevent him from several bad deeds because he is always under my career,” he added. 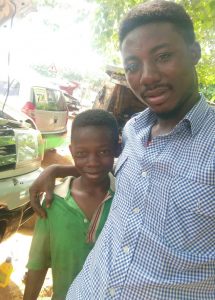 David, who was the right-back in our school’s football team, took his mat and went under the car and carefully drained the old oil from the engine before his uncle took over. He later started the engine and sat in for some time to check the sound the engine will make and latched ame to hand over the keys to me.

All this while, I was a bit sad since I at least, wanted him to attain a BECE certificate but, the joy and zeal he exhibited while working and the smiles all over his face, made me think that probably, he will be good here.

All the best Dave (as I affectionately used to call him)…..I will miss you.