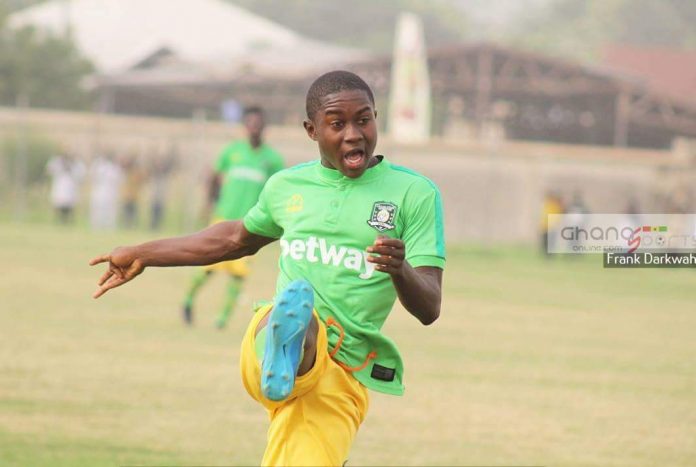 Aduana Stars midfielder Gideon Obeng Kyeremeh, popularly known as Superstar, has become the youngest player-ever to play in the Ghana Premier League, according to an investigation by SportsObama.

The TI Ahmadiyya Senior High graduate, born on December 14, 2003, made his bow in the top-flight aged 13 years, 10 months and 22 days, on November 6, 2017 as he was brought on for Richard Mpong when Aduana Stars locked horns with Berekum Chelsea last season.

Also, in the pulsating game against Hearts of Oak at the Accra Sports Stadium which ended 3-3, and ended the Phobians ambitions to win the title, the wonder kid made an appearance.

Although, ‘Superstar’ wasn’t aware of the record made, he revealed that he was initially nervous whenever he shared the dressing room with notable faces in the Premier League.

“I don’t know anything about the record,” he told SportsObama.com.

“I have been enjoying the experience of playing for one of the biggest teams in Ghana and to share a dressing room with these big players in the league.

“At first, I was a bit nervous but after staying with the team for over a year, things have become normal”.

Aduana head coach Yussif Abubakar could not hide his admiration for the youngster and believes he has a great future.

“He is a very talented and skillful player for his age,” he said.

“I knew he was that young but looked determined and brave. I played him even in the Aduana against Hearts that we drew 3-3 and he was the smallest on the pitch [but has a great future],”.he added.