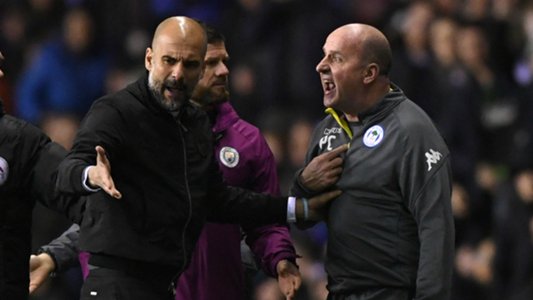 Pep Guardiola was involved in a heated exchange with Wigan manager Paul Cook in the tunnel at half-time in Manchester City’s FA Cup fifth round tie at Wigan.

The Catalan manager was enraged after seeing Fabian Delph sent off towards the end of the goalless first half at the DW Stadium on Monday night.

Referee Anthony Taylor looked like he was going to book Delph for a challenge on Max Power as he had his yellow card in his hand, but brandished the red instead.

Guardiola remonstrated with Cook on the touchline, but television cameras showed that the incident continued down the tunnel.

The two were seen shouting each other before the City boss was pulled away from his counterpart, who then walked towards his team’s dressing room.

Guardiola didn not stop there, though, as he waited for the referee to appear before following the official.

Delph will receive a three-match ban for his wild slide on Power, meaning he will miss Sunday’s Carabao Cup final against Arsenal as well as Premier League clashes against the Gunners and reigning champions Chelsea, unless there is a replay against Cook’s Wigan slotted in somewhere in between