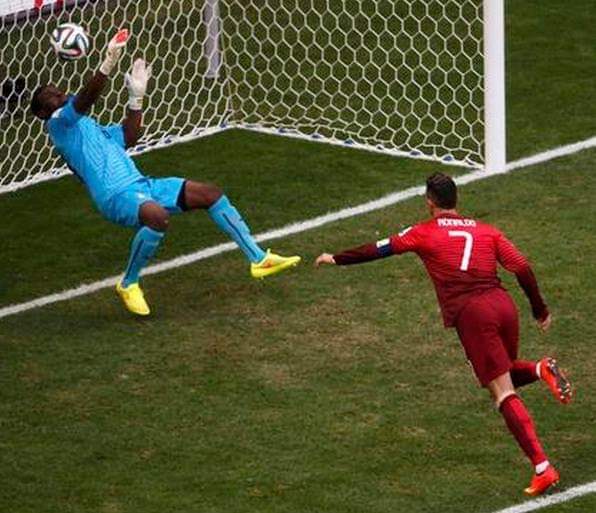 Ghana goalkeeper Fatau Dauda has revealed that he was excited to have saved an effort from Juventus forward Cristiano Ronaldo when Ghana played Portugal at the 2014 Fifa World Cup because he felt he had made his trainers proud.

After picking only a point from two games in Group G, the Black Stars needed a win badly against Portugal in the last game at the Brasilia National Stadium to stand a chance of qualifying to the next stage but despite Dauda’s initial heroics, Ronaldo proved too strong to aid his side win the day.

“Let me set the records straight for every Ghanaian to understand. The main reason why I jubilated after saving Cristiano Ronaldo’spoin-blank header during the 2014 Fifa World Cup in Brazil was that before the group stage games, our technical handlers showed us videos on our opponents especially the stars in each country so that we could know how to beat them or save the situation. The goalkeeping coach also taught me a lot of things when watching our opponents videos,” Dauda told B.A TV

“On that of Ronaldo, he gave me all the technicalities I can use to save Rinaldo’s balls from entering my net and one of the things he taught me on CR7 before the Portugal game was what I replicate o save that dangerous header from him.

“So it was like getting answers correct to exams questions but most Ghanaians thought I was just overly excited merely because I saved that header. I was just happy because as a good student, I was able to follow the instructions of my coach,” he added.

Dauda, after stints in South Africa and Nigeria, is now plying his trade with Ghana Premier League side Legon Cities FC.