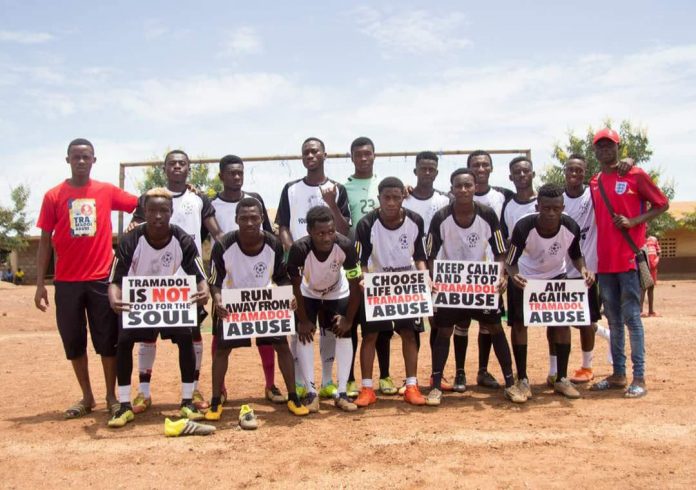 Following the ban on the opiate painkiller called Tramadol, which has been damaging a lot of people especially the youth’s lives and future, Kele initiative has taken it upon themselves to also help in curbing its usage since it’s still being traded illegally in many ghettos and slums.

As part of their project, there was a fun game and educational seminars organised in Sunyani last weekend with several young men participating, to further create enough awareness on the effects that the drug comes along with.

Following series of pulsating football encounters, Amidus FC ended up as victors after hammering Weezy FC 3-0 in the final to clinch the title.

Prince Karikari, founder of Kele Initiative expressed his delight following the successful program but called on other corporate organisations and NGOs to come to their aid in fighting the abuse of the drug since many young people continue to mix it with other drinks and substance before work, sex, etc.

“I did organize a #Endtramadol Abuse Gala games at New Dormaa Park inside Sunyani on Sunday and it received massive participation,” Kelele told AshesGyamera.com.

“Amidus FC and Weezy FC went to the final but Amidus won 3-0 to annex the virgin cup. Latif salifu from Amidus also emerged the best player of the tournament. To be honest, he’s a future prospect.

“We however, call on other corporate organisations and individuals as well as NGOs to help us in their own little ways so we can expand the programs to many places and save the youth. We can save them through education and counseling and it is possible that some of the addicts can even become prominent figures in the nearby future,” he added.

There are other programs lined up to take place in other cities and towns in the Brong Ahafo region before the close of the year.

According to AshesGyamera’s sources, Zylofon Media’s top hierarchy will be meeting in the coming weeks and it’s likely they will offer a hand as part of their social corporate responsibilities.