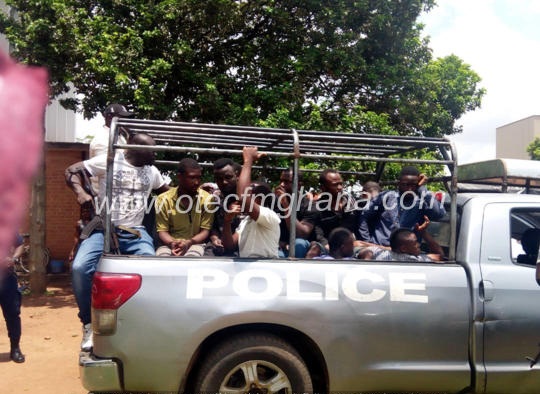 Thirty-four suspects have been remanded into prison custody by Kumasi Circuit Court Four which was presided over by His Worship Justice John Eckow Mensah on Wednesday March 21, 2018, in connection with clashes between Zongo youth and Asante natives, which happened in Ahwiaa in the Kwabre East Municipal in the Ashanti region on Monday March 19, 2018, which claimed the life of one person.

Fifty accused persons were arrested on the day, of which sixteen were give bail.

With exception of Mariam Ibrahim all live at Ahwiaa what is known as Asante Line of Ahwiaa in the Kwabre East Municipality of Asante Region.

He further stated on same day, at about 11am the group was confronted by another group also live in the area what is known as Zongo Line of Ahwiaa.

The confrontation was over a percieved sexual relationship between Emmanuel Kwabena Oppong who is from Asante Line and Mariam Ibrahim from Zongo Line, he added.

He stressed in the course of the confrontation, members of two groups briefly retreated and resurfaced, all of them armed with machetes knives and other offensive weapons.

“They also armed themselves with offensive weapons, blocked the main Tafo-Mamponteng road and started attacking each other, the police received a report of the incident rushed to the scene and arrested the accused persons and after interrogations charged with the two counts of Conspiracy to Commit Crime to Wit; Rioting with weapon Contrary To Sections 23(1) And 199 of The Criminal Offensive Code,” he added.

However the defense legal Counsels led by Lawyer Solomon Oppong Twumasi after hearing the prosecution initiated bail process for the accused persons but was granted only 16 out 50 accused persons brought before it, on the ground of being juveniles and aged persons.

They are to reappear on March 27, 2018 while the court ordered the police to keep the 34 in police cells.