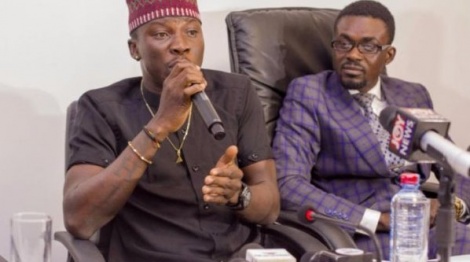 The owner and bankroller of Zylofon Group of Companies Nana Appiah Mensah (NAM 1) has send a heartfelt apology to dancehall artist Stonebwoy after his car was almost forcefully taken from him on Saturday.

Stonebwoy’s camp was alleged to have ordered that all Zylofon materials be taken down before and during his performance at University of Ghana despite the former being the sponsors that night.

That action, according to reports, led to some section of the Zylofon crew led by the transport manager to attack Stonebwoy and tried to take away his Benz which they insisted that it belonged to the their company at the Champs Bar, and the musician gave out some warning shots to disperse the crew and later drove off.

I apologize to team @stonebwoyb and all well wishers for the unfortunate ill incident that occurred. The transport manager exercised a discretion characterized by reflex and over exuberance. An act I vehemently condemn and discourage from our society. pic.twitter.com/me8U3Anvt9

Stonebwoy was signed to Zylofon Music label last year but he has shown signs of unhappiness following the arrival of his rival Shatta Wale, especially the hype that surrounded his signing and unveiling.

AshesGyamera understands that the traffic manager has been suspended indefinitely but Stonebwoy is in the process of officially cancel his contract with the label since he feels unsecured.