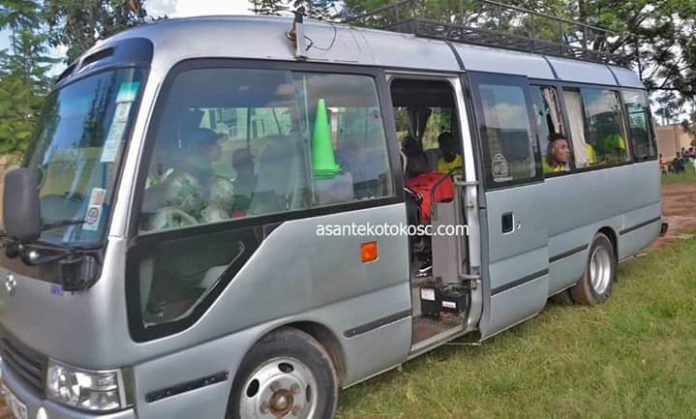 Kariobangi Sharks have denied allegations levelled against them by Asante Kotoko ahead the Caf Confederation Cup fixture at the Kasarani Stadium on Saturday in Nairobi.

The Porcupine Warriors caused an uproar on Wednesday after touching down as they rejected a bus given them by the hosts, insisting that it was too small to accommodate their contingent.

They later complained about a substandard training pitch they were made to train on but the Kenyan club has insisted they are not at fault since Kotoko even failed to share their traveling plans with them.

“It’s disturbing to note that our opponents have resorted to creating a false illusion of mistreatment.We would like to clarify that we’ve done our best as per CAF regulations and shall continue to do so,” a club statement read.

“Furthermore, it’s important that the public knows that our opponents refused to share their schedule & travel plans with us & on arrival they started making unrealistic demands that fall outside the CAF regulations. Such is not good practice.

“Our opponents should stop hiding behind such rumours in order to justify any unethical practices they may be planning when we visit them in Kumasi, for the second leg. If they feel we have breached any of Caf’s regulations, they should go ahead a make a formal complaint at Caf, ” the statement added.

The return fixture has been scheduled for December 22 at the Baba Yara Sports Stadium in Kumasi.