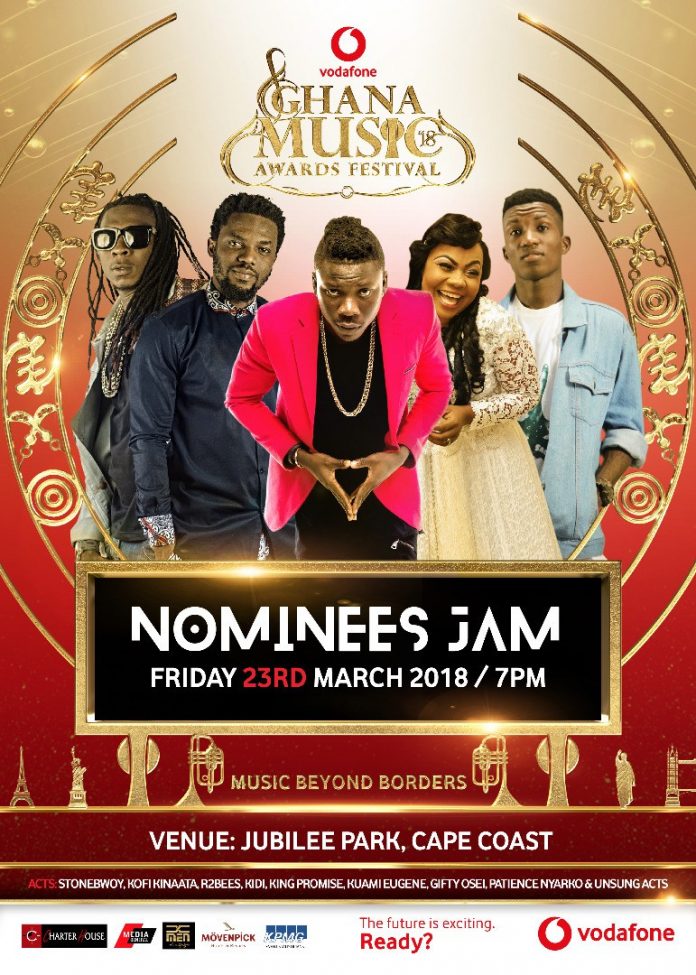 Then something significant happened in 2003
In 2003, Kojo Antwi released the Densu album which had Mmirika that was very popular. Also Kontihene had come onto the scene with Aketesia which was a sing along song that enjoyed massive airplay across Ghana.

Because of events on the night, everybody expected Mmirika to win but to the utter dismay of Ghanaians, Aketesia by Kontihene won the biggest award in 2003, SONG OF THE YEAR with Aketesia.

Ghanaians questioned organizers Charterhaus(CH) how Aketesia lost a smaller category of Hiplife Song to Kluu Blofo but won the biggest award competing with the same song.

It was like Michael Essien winning the FIFA footballer of the year and Charles Taylor winning the BEST Ghanaian footballer that same year
CH was thus forced for the 1st time to publish the results in the Graphic Showbiz.
Kontihene had 24.50% and Mmirika 24.30% if my memory is right.

CH explained that voting was by cutting out a piece of the Graphic Showbiz with the nominees and choosing your winners and mailing them. So since SONG OF THE YEAR was the biggest award, somebody could vote for only that category and won’t vote for other categories like HIPLIFE.

Their explanation basically was, not all the people who voted in one category like SONG OF THE YEAR voted in other categories. So that could be the reason Kluu Blofo won Hiplife Song of the year and lose out on the biggest award to Aketesia, even though it won over the latter in the Hiplife category.

People said this was because they felt Aketesia was popular among lots of Ghanaian so changing it would reflect the voting pattern. Charter House never confirmed this.

So in 2004 Ahomka Wo Mu by VIP won whilst they won Artist of the Year too.

2005 Konkontibaa by Obour and he also won Artist of the Year.

2006 Otoolege by Ofori Amponsah and he won Artist of the Year.

Then 2007, another brouhaha arose.

The biggest artistes in 2007 was Ofori Amponsah and Samini and on the night had won so many awards.
So when Samini won AOY, Ghanaians thought the biggest award MOST POPULAR SONG OF THE YEAR will be Odo by Samini or Odwo by Ofori Amponsah.

Then came another scandal that rock the awards in 2008 that had the gospel musicians threatening to boycott the awards .
The criteria for the GMA included that songs were to be released from October to November of the next year. Eg October 2007 – November 2008
So Charter House at start of the year had not put out any communique on changes.

2008 was election year in Ghana and the late President Atta Mills had used a song by an SHS teacher Lenny Akpadie as his campaign song and even a rendition had been done using his name. The song was Most High God and it was the most popular song in Ghana in 2008.

It was an open secret this was the first time a gospel song was going to win the biggest award at the Ghana Music Awards MOST POPULAR SONG OF THE YEAR. Then thunder struck. Kwaw Kese after fighting Charter House in 2007 for not giving him some awards he thought he deserved, worked hard.

He was the most sort after artiste in Ghana in 2008 and arguably the best artiste that year. Nobody came close to Kwaw Kese.
We woke up one day and Charter House said for the 2008 awards moving on, the biggest award was changing from MOST POPULAR SONG OF THE YEAR to ARTISTE OF THE YEAR

The Gospel music fraternity led by George Forrest(RIP) threatened to boycott the awards because they felt they had been shortchanged and that meant Charter House didn’t respect them
How come the organizers changed this only when a gospel song was poised to win the biggest award on the night?

The awards came on in 2008 and truly Most High God by Lenny Akpadie won MOST POPULAR SONG OF THE YEAR but the biggest award on the night went to ARTISTE OF THE YEAR Kwaw Kese
The gospel musicians rescinded their decision to boycott and went for their awards.

And since 2008, the biggest award on the night at the Ghana Music Awards has been ARTIST OF THE YEAR with Okyeame Kwame, VIP, Sarkodie, R2Bees, Shatta Wale, Stonebwoy, Joe Mettle (Gospel artiste) and Ebony (female winning it posthumously) all winning it.

Then the biggest controversy in 2019
In 2019, Ghana’s biggest arts included self acclaimed Dancehall King Shatta Wale and his rival in the Dancehall genre Stonebwoy
So the stage was set for who will truly be declared Dancehall Artiste of the year

The hype around that was bigger than who will win Artise of the Year. The awards started and Shatta Wale won his first award which was Highlife Song of the year with My level. His song Gringo also won Dancehall song of the year

Then the moment of truth came, the Ghana Music Awards Dancehall Artiste of the year goes to Stonebwoy. He went on stage to receive his award and there comes a commotion on the stage. Shatta Wale and his gang had gone onto the stage and a fight ensued with Stonebwoy pulling a gun.

When tempers were calmed, the awards continued but organizers said nobody will be awarded SONG OF THE YEAR and ARTISTE OF THE YEAR because the 2 had won those awards but because of their behavior, they will not be given the awards and later banned indefinitely.

Shatta Wale after the event said he was going on the stage to congratulate his brother Stonebwoy who rather thought because of the enmity between them, his colleague was coming to hurt him. Ghanaian authorities have since been prosecuting the two in court.

The two even before the case in court is finished, have patched up their differences and are now the best of friends with their fan base no longer fighting both online and at public events.

Then comes 2020 for the awards to be held in April and the deadly coronavirus struck.

So the awards is still on hold with Ghanaians waiting for organizers to tell them their next move but until then Ebony who won the Artise of Year posthumously is still the reigning artiste of the year.