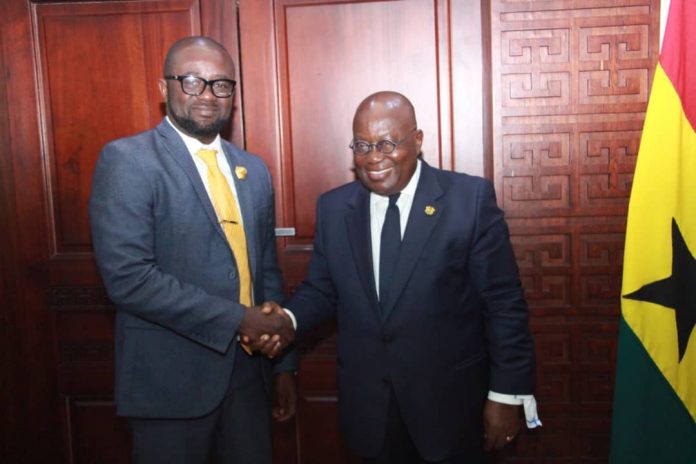 Techiman City City bankroller Micky Charles has insisted that it was wrong for new Ghana FA president Kurt Okraku to visit the president of Ghana Nana Addo Dankwa Akufo-Addo with his friends instead of the executive Council.

On Wednesday, Okraku paid a courtesy call on Akufo-Addo at the Flagstaff to formerly introduce himself to him after he was elected by football delegates last week.

However, he was accompanied by his wife Rebecca Okraku, Ameenu Shardow, Michael Bogdan Osekre and Youth and  sports minister Isaac Asiamah without any member of the exco present.

“There is one thing I saw when the GFA president visited the Jubilee House which I believe it was wrong. I didn’t see any of the executive council members in the pictures circulating, and its not the best” Micky Charles told Asempa FM.

“Its too early for Kurt Okraku to be embarking on such official visits without the council members he is going g to work with at the FA. I don’t know why he went there without them but I think its something that is not right and shouldn’t be repeated especially at this early stages of his tenure in office,” he added.

AshesGyamera’s sources have however revealed that Okraku is hoping to make amends by planning another visit to the Flagstaff house where he will go with all the exco members.

Okraku, together with new executive Council will be in office until 2023 before a new election will be held.