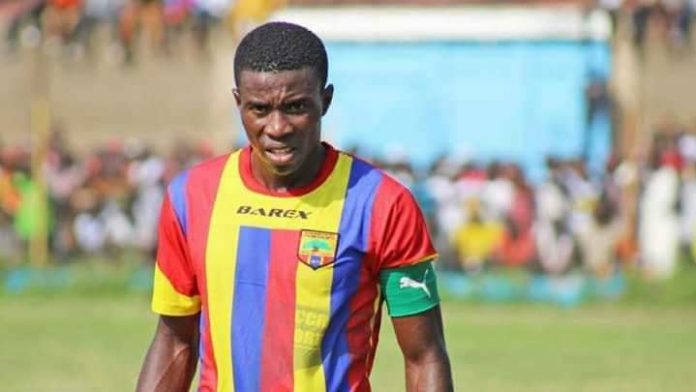 Hearts of Oak former captain Thomas Abbey has revealed that the club lost the 2017 Ghana FA Cup to Asante Kotoko due to an impasse among the players, technical team and management members.

After a wonderful run in the campaign, the Phobians were thrashed 3-1 by Kotoko at the Aliu Mahama Sports Stadium thanks to a first-half hat-trick by Sadick Adams and Abbey has insisted that the players were not mentally and physically prepared for the game since they were owed three months salaries as well as winning bonuses from seven games which generated confusion in camp.

In an interview with Angel FM Accra, Abbey said;

“I can say that before the match, everything favoured Hearts. We were supposed to win but there were very serious problems in the team. We had not been paid for three months and winning bonuses from seven matches were also not paid.

“I can tell you that, before the final, we were not even training. We were protesting so we will go to the training grounds and only jog for twenty minutes and go back home.”

He added: “Most of the players had their contracts expired so we knew the match was the last opportunity to demand our pay. Not surprising that we lost in the first half. I can say it was what led to the defeat.”

Hearts are without a major trophy since lifting the 2009 Ghana Premier League title and that has mounted pressure on the top hierarchy to change the direction of the club in other to return to winning ways.

Football Ashes Gyamera - June 30, 2020
0
The country's football association highest decision making body has agreed to call the 2019-20 season null and void following the COVID-19 pandemic Ghana Football Association...
ABOUT US
Ashes Gyamera | Seasoned Sports and News correspondent | Follow us for your news, entertainment, music, and fashion trends. We provide you with the latest breaking news
Contact us: [email protected]m
FOLLOW US
© Ashesgyamera.Com | Powered By Emetrics