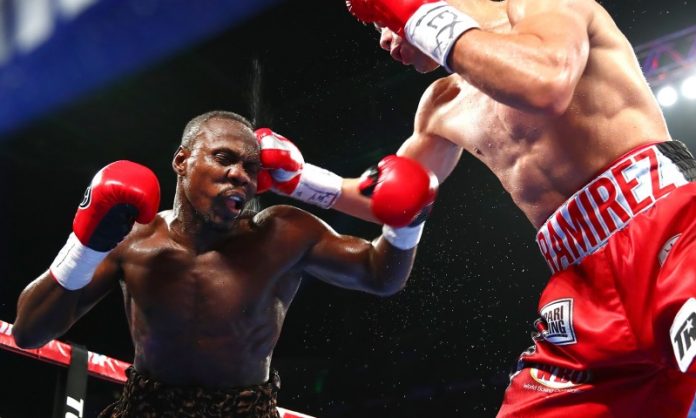 Ghana’s Habib Ahmed’s aim of becoming the WBO Super Middleweight champion was dealt a huge blow as he was defeated via a Knockout by the sixth round against defending champion Gilberto Ramirez at the American Bank Center in Corpus Christi, Texas on Sunday.

Ramirez, who prior to the bout, boasted an enviable statistics of 36 fights with 24 knockouts and without a defeat, made sure the Ghanaian’s dream came to an abrupt end at least for now.

Between the first and third round, Ahmed showed a glimmer of hope as he blocked several punches from Ramirez and although, he threw few punches in return, they also caused some problems for the Uruguayan.

The Ghanaian even had an advantage when a clash of heads opened up a cut above the left eye of Ramirez but the defending champion mopped up a well-rehearsed strategy to prevent Ahmed from capitalising on his injury.

By the fourth and fifth round, Ramirez’s performance was on the ascendancy while Ahmed’s performance surprisingly took a terrible nosedive. The latter couldn’t throw more punches this time and resorted to blocking the heavy punches from Ramirez and winding down the time while running around in the ring. 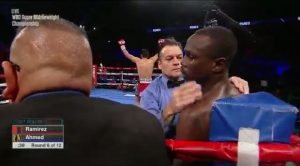 Things looked falling apart for Ahmed in the sixth round, and despite his resistance initially, his corner threw in the towel to accept defeat and prevent damages to him as referee Lawrence Cole stepped in and halted the fight. The fight was stopped at 2:31 of round 6.

Ramirez has now increased his records to 25 knockouts and has revealed that he wants to face middleweight champion Gennady Golovkin.