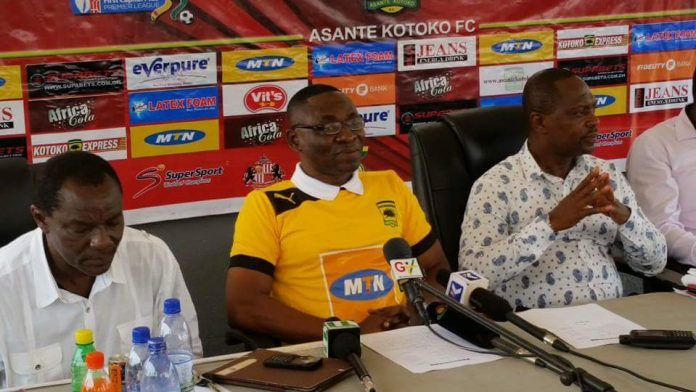 Asante Kotoko former boss David Duncan has taken the past management to the cleaners after one member described him as the worst of all decisions taken during their tenure.

According to Solomon Ofosu-Ware, during an interview with New Mercury Radio in Kumasi, the club’s decision to appoint Duncan to succeed Didi Dramani in 2015 was a big mistake.

And, Duncan didn’t take that comments lightly as he described it as laughable, insisting that none of the management members during that time, including Samuel Opoku Nti, George Kennedy, Edmund Ackah, Ofosu-Ware and Kwaku Ahenkorah had a better job or profile prior to their stints with Kotoko.

They must 1st tell the world what they did for a living as management members of a great club like KOTOKO. https://t.co/DF3lqSc1gH

Laughable! The least said about this… https://t.co/DF3lqSc1gH

Let each one of those management members put out his profile for all to see the stuff they are made of. It will shock you. https://t.co/DF3lqSc1gH

"Worst Decision"?When I met all targets set for me in my contract until the said management chose to breach the contract for obvious reasons https://t.co/DF3lqSc1gH

Duncan was sacked after he failed to win the 2015 Ghana FA Cup title as well as seeing Kotoko eliminated from the Caf Confederation Cup by Algerian side MC Eulma. Also, under outspoken coach, Kotoko recorded three defeats, one win and two draws in six games, in the 2015-16 campaign, their worst ever start to any season since they were languishing at the bottom of the log with six points.

Asistant coach at that time, Michael Osei, was appointed to takeover until further notice before he was sacked for Zdravko Lugarosic.

Kotoko have sacked seven coaches since 2013 and Steve Polack was the latest to be shown the exit door last week, with his place taken up by Paa Kwesi Fabin.