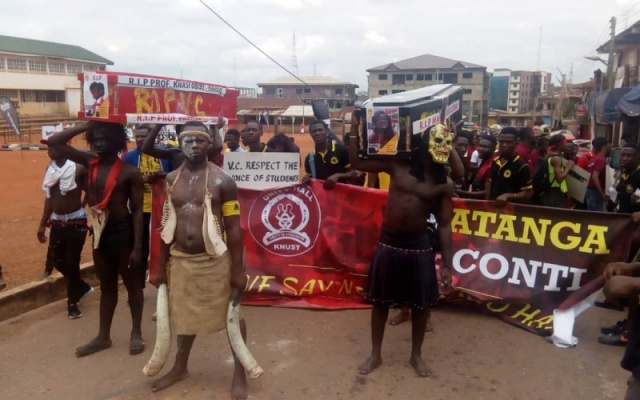 A Kumasi High Court two has struck out an injunction application case seeking to restrain the management of the Kwame Nkrumah University of Science and Technology (KNUST) to convert two male halls of residence of the University into a mixed one.

Alumni of the Unity and University Halls had sought an injunction application against the conversion of the halls.

Both Continental and Katanga halls have been protesting the decision by management to convert the halls.

There was a heavy police presence at the premises of the court today, Friday, August 24, 2018.

Both alumni and continuing students from both halls had massed up at the court premises to witness the case.

The court presided over by Justice Samuel Obeng Diawuo explains the applications came after the University had allocated accommodation to students who had admissions.

The Judge also explained that granting the request by the plaintiffs will cause inconvenience for fresh students who had already secured accommodation at the University.

He hinted at heading to the Supreme Court to challenge the ruling and seek proper interpretation on the matter.

The two halls have already petitioned Asantehene Otumfuo Osei Tutu II, Chancellor of KNUST, to intervene, after demonstrating through the principal streets of the Ashanti Region.

The Students’ Representative Council (SRC) of KNUST has also petitioned President Nana Addo Dankwa Akufo-Addo over the conversion of the school’s single-sex halls.

The SRC claimed several pleas to the school’s authorities to rescind the decision failed hence the petition.

“By this petition, we ask that you intervene in the matter to get the University to have a review on issues thus far, and get the best result which will favor the entire student populace,” a section of the petition pleaded.