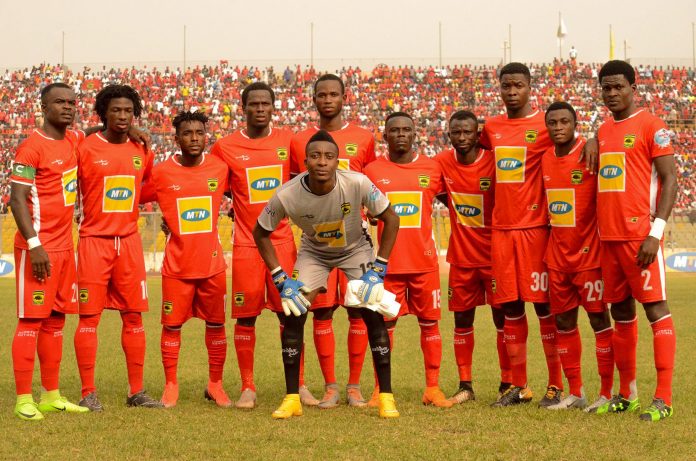 Two goals from captain Amos Frimpong and Maxwell Baakoh did the damage on the visitors despite a late consolation following a mistake by left-back Abass Mohammed.

Kotoko will now have to wait for Monday to know which group and opponents they will face after the draw is held.

How the players fared over 10:

Felix Annan (6) – The shot-stopper was virtually on holiday in the first-half as he did not make a single save but he eventually picked one ball from his net. For a third game running and second game in a row at home, the young goalkeeper could not keep a clean sheet.

Amos Frimpong: (6.5) Captain fantastic. After guiding Kotoko to lift the FA Cup in 2017, the defender achieved another milestone by leading the Porcupines to group stage. He has now scored two goals in the competition.

Abass Mohammed: (5) The youngster was obviously not having a good game after he was brought on to replace suspended Augustine Sefah. It was not a surprise that one of his mistakes led to Coton Sport’s consolation goal. He needs to up his game whenever he is given another opportunity.

Emmanuel Agyemang Badu: (7) The youngster is an asset for the future. He was very composed at the back and won majority of the duels he went in.

Abdul Ganiyu: (6) The bulky defender’s partnership worked to perfection on the day. His recovery and aerial abilities kept the visitors’ attackers at bay especially captain Daouda.

Richard Senanu: (7) The midfielder has proven why he has constantly been picked ahead of Jordan Opoku and Daniel Nii Adjei. Senanu’s work rate and passes were spot on and could be a great factor should Kotoko make it out of their group to the knockout stage.

Kwame ‘Conte’ Bonsu: (7.5) The most improved player in Kotoko set up is the former Heart of Lions player. Judging from his off-the-field issues including serving a jail term, he has been able to recover and marshalled the midfield with ease.

The former Mim Freedom Fighters winger was without a doubt the danger man in Kotoko’s set-up with his surging runs and teasing crosses. He was able to tear Coton Sport’s defenders apart and created several goalsscoring opportunities. He should could scores one goal to cap such a wonderful performance.

Abdul Fatawu Safiu: (7) The former Inter Allies man could not make it three goals in three games but he never disappointed through out the game as saw full throttle. He has been a good buy so far for the Porcupine Warriros and coach C.K Akonnor will be happy with his decision to sign him for this campaign.

Songne Yacouba: (7) The Burkinabe international was very quiet but he gradually warmed himself into the game and even won a penalty in added time of the first-half which was converted by Amos Frimpong. However, he fluffed several opportunities, especially in the second-half and could not break his duck in the competition after four games. He was replaced by Obed Owusu.

Maxwell Baako: (8) What a player! The diminutive winger is a delight to watch. He was able to score Kotoko’s second goal from a quick restart.

They cannot be rated as they spent few minutes on the pitch.

Prince Acquah (76′ min): The midfielder came on for Maxwell Baakoh but his could do little to influence the game.

Just like Acquah, Obed’s presence wasn’t felt that much.