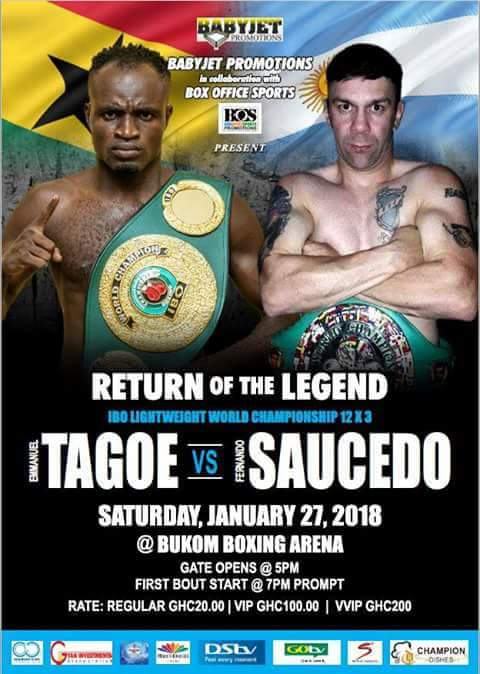 This fight has been on the wish list of the Ghanaian who somewhat has proven to be the best in the country now and by extension, registered his emotions being the most richest boxer in Ghana.

When Tagoe’s nemesis –Fernando Saucedo pulled out of their initial meeting, it greatly affected the Ghanaian’s plans and he believed the Argentine was running away from him.

It has always been on the checklist of the stylish Ghanaian pugilist to pursue a shot at the biggest pinnacle of the four main divisions-and Saucedo would not be a stumbling block.

Many Ghanaians have doubted the ring potentials of Tagoe but truth is bitter. After perusing through his testimonials, Emmanuel Tagoe is undoubtedly the only existing World Champion in Ghana and perhaps an unsung hero in recent times.

We have so soon forgotten that the ‘Game Boy’ actually effected the leeway for upcoming boxers like Dogbe, Micah and Commey to follow.

It is well established by boxingghana.com beyond all skepticisms that the tough talking boxer is indeed the only Champion the country can boast of as at now.

But this fight will perhaps shut down the pessimistic philosophy surrounding his reign as the only World Champion that the country currently has when he cruises to victory on Saturday night. No questions about that.

Fernando saucedo in all fairness will not be counted as one of Argentines finest boxers, notwithstanding his long lists of fights he has gone through.

Sergio Martinez fought Miguel Cotto-a hall of famer.Oscar Bonavena was yet another heavyweight legend in Argentina in the 70s.He had a naughty grumble with the then intrepid ring Heavyweight of the world, Joe Frazier ,knocking him twice to the canvas but eventually losing on a split decision. Oscar again lost to legendary Muhammad Ali in 15rounds

Middleweightchampion- Sergio Martinez is heartly recognized by his single-shot demolishing of Paul Williams in their 2010 engagement and is touted as one of the most iconic knockouts in recent years.

Carlos held the world middleweight title for 7 years in the 70s.Hewas a methodical ring general and brutalized opponents and no wonder he has become a major celebrity in South America.

Saucedo lost to Nedal Hussein from Australia(48,43wins,27kos 5 losses )an opponent who had tasted the wrath of Pacquio for the International Superbamtamweight title in 2000 and was Koed.The Saucedo- Nedal fight in May,2004, had the vacant WBO Asia Pacific Super Featherweight Title on the line in which Saucedo was disqualified.

Infact Saucedo fought credible opponents like, Claudio RosendoTapia, Acelion Freitas and Chris John. He lost to John a by UD in 2010 in Jakarta His last loss was against Rances Barthelemy- in 2004 in an IBF Super Featherweight defensefor the latter.

In fact, the credibility of Chris John-the dragon-(52-48-22kos-1 loss-3 draws-)a former Indonesian champion is worth mentioning because the rugged Indonesian had fought Juan Manuel Marquez before in which he won over 12 rounds.

Saucedo fought Rances Barthelemy(27-26-13kos-0-0)who defeated Argenis Mendez on January,3 2014 and lost. He was again defeated in a rematch.

The aging Argentine has a -lower KO percentage notwithstanding his long role call in the ring. It is a difficult assignment for Saucedo anytime he steps up to world class fights; a typical example was when he fought Freitas and Chris John. He was completely shut out on the cards.

He is a very experienced fighter with craft and very good at staying on the outside and countering his opponents with improvised aggression. He throws fluid combinations attacking the body and shifting quickly upstairs.

He paws with a jab and leaves himself very open for the counter right hand but lacks punching power.

Very comfortable from the outside and this is a sure recipe for disaster against Tagoe who is very cunning with his infrequent sweeping counters. Saucedo will surely apply the principle of staying in the face of Tagoe and throw tones of punches to confuse the Ghanaian.

But this will be comical for the ”Game Boy”who the least respects a boxer who has fought over 70 times with only 10 Kos.

The Ghanaian has cropped up in some unthinkable confidence of late and that is the hidden key to his inevitable victory on Saturday.

The “richest boxer in Ghana” as he touts himself, needs to scribble his flaws and seek for earlier corrections ahead of the fight.

He has on a couple of occasions exhibited some hilarity in the ring which must be eschewed. Nonetheless, I feel he has fought some credible boxers in this likes of Lantey Addy, Malik Jabir,George Ashie, and Allan Kamote.

In fact his capturing of the IBO Belt recently when he hospitalized Mzonke Fana was a pleasure to observe. Tagoe showed explicit ring craft to dominate the South African.

One fight I love so much was that against American Geraldo Robbles.It was a complete litmus test for the Ghanaian. And he shone. My happiness for Tagoe in that fight is premised on the rich record of the American who had earlier fought names like Brandon Rios,Manny Pacquio and Timothy Bradley.

Again against Carlo Magali, Tagoe proved his worth as a big name in the annals of Ghana Boxing. Incredible! Tagoe brushed off the bluff of Carlo who had a fresh CV in knocking out Japanese contender – Masatoshi Kotani.

The Ghanaian boxer has had to eradicate on his way to glory three Filipinos who had been a huge impedimentia is on his path.

Admittedly, Tagoe had a nightmarish performance against the stubborn Pontillas at the Bukom Emporium forcing a heartbeat majority decision of 115-115,116-112,118-111 from the three judges : Shadrack Acquaye,Adon Berthin of Benin and Frederick Ghartey of Ghana. The Ghanaian visited the canvass on two occasions- 4th and 9th rounds.

Tagoe has come of age and all the cards are sloping in his favour. His handwork has improved. His backroom staff are relentless in his progress. The fans are reckoning to see him gel in the ring. He needs to stamp his authority as the best in the country. He’s got it.

The Bukom Boxing Arena has also become a lions den for many visitors but most of all I think ‘Game Boy’ has matured over the years enough to win on the day. No two ways about that.

Statistically, Saucedo might have fought many boxers but only a few are credible. He has had little taste outside his native country as well.

Boxingghana believes it is a perfect pick for the Ghanaian. A good challenger but not dangerous.
Length and power, speed and skill will be far too much for the light-hitting Saucedo. I don’t think this fight will see the round of 6. I see no reason why Tagoe shouldn’t be able to defend this title on a icy note. His fistic ambition is on the line. It’s a done deal. Game Boy wins.