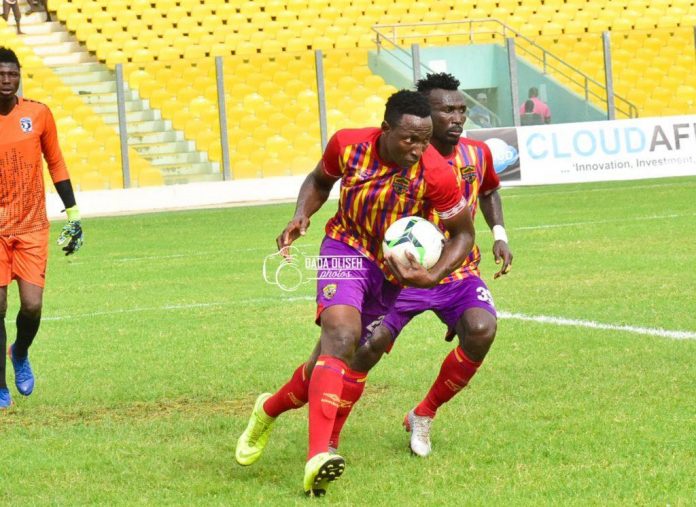 Hearts of Oak continued their resurgence under interim coach Edward Odoom with a deserving 3-2 win over Bechem United in front of their vociferous supporters at the Accra Sports Stadium.

A brace from Kofi Kordzi, which was sandwiched by Fatawu Mohammed’s goal, was enough to carry the day despite goals from Prince Adu Kwabena & Hafiz Konkoni

At the Baba Yara Sports Stadium, Asante Kotoko and AshantiGold shared the spoils goalless in the Ashanti derby which was played behind closed doors.

Appiah McCarthy nearly won the day for the visitors very late in the game but his free-kick hit the upright but despite the stalemate, the Miners have still gone top of the log.

Liberty Professionals, on the other hand, thumped Aduana Stars 5-2 at the Carl Reindolf Park in Dansoman.

Yahaya Mohammed scored a brace for the visitors but another brace from Elvis Kyei Baffour coupled with goals from Mubarak Alhassan and Abass Nuhu did the damage for the hosts.
Yahaya has has taken his tally to ten goals after ten games.

In Sogakope, WAFA’s attack was shut by Dreams FC whose dream of avoiding another defeat became a reality. The two sides drew goalless in an entertaining encounter at the Red Bull Academy Park.

Meanwhile, Ebusua Dwarfs came from a goal down to defeat Karela United FC 2‐1 in matchday 10 at Cape Coast Sports Stadium on Sunday

In Tarkwa, Medeama lost for the first time at home this season in a 2-1 defeat to Elmina Sharks thanks to goals from Alhaji Mustapha and Benjamin Bernard Boateng

The Yellow and Mauve’s hopes of lifting the league trophy for the first time has been dealt a huge blow.

On Friday, Eleven Wonders made it two wins in a row after they pipped King Faisal 2-1 at the Ohene Ameyaw Park. After Osman Ibrahim gave the visitors an early lead, Wonders turned the game on its head with goals from Musa Sule and Samuel Boakye.

Later, Legon Cities FC couldn’t end the Valentine’s Day with joy as they were held at home 1-1 by Great Olympics. Yakubu Mohammed’s goal for Legon was cancelled out by Ibrahim Sulley.

On Saturday, Inter Allies shocked the city of Berekum and Ghana as a whole when they thrashed Berekum Chelsea 3-1 at the Golden City Park.

Two goals from Nigerien import Victorien Adebayor -making it ten goals of the season- and another strike from Samuel Armah ensured that Chelsea suffered their first defeat at home this season despite Augustine Henneh’s consolation goal.