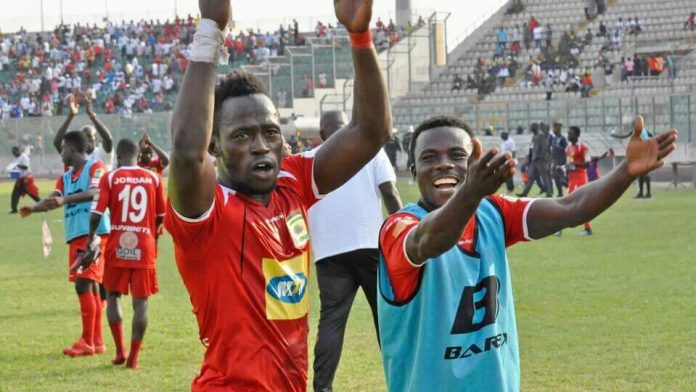 Following the near-shambolic 1-0 victory by Asante Kotoko against Congolese side CARA Brazzaville, which included three missed penalties and a late goal from substitute Yakubu Mohammed, Osei Akoto Kanu has come up wih his ratings.

The second leg of the tie has been slated for February 21 in Brazzaville.

Felix Annan 9/10
Very solid in post, kept an impossible clean sheet after two world class saves. You only see De Gea, Oblak, Neuer, Ter Stegen of this season etc making such saves. He in my opinion won the game for Kotoko not Yakubu.

Amos Frimpong 6/10
As usual, the captain ran up and down for 90 mins and contributed enough in creating chances for the team. But for his penalty miss, it would’ve been another perfect Afternoon for the ex BA Utd captain.

Eric Donkor 6/10
A bit silent in the game in my opinion but you can’t write off his contributions in creating dangerous situations with his inswingers and set pieces.

Awudu Nafiu 5/10
I rate his average. He is still struggling to gain his confidence back. Remember he spent entire last season on the bench. A top top quality player but couldn’t live up to my expectations.

Wahab Adams 6/10
Debut game for Kotoko in Africa for the ex Aduana Stars stalwart. Wasn’t tested too many times but excelled in the few times the Congolese tried taking him on.

Jackson Owusu 8/10
Very electrifying game for him. Won tackles, passed very well, tried some through balls couple of times which I expected him to unleash some long drives. He was just a delight to watch.

Emmanuel Gyamfi 4/10
Seen him had one of the bad days in a Kotoko jersey. He attempted many take-ons and failed in a lot of them. He got desperate and gifted CARA a penalty which Annan eventually saved. That was just not Pajero or perhaps a Pajero with a flat tire.

Jordan Opoku 6/10
He started very well in the game but his power went off midway through. He failed to produce those trademark penetrating balls. I expect a strong competition for him from Sylla if his output remains same.

Sadick Adams 6/10
Missed a crucial penalty on the 8th minute that could break CARA down and expose them more attacks. His usual strong mentality did not sway his concentration off. Came back in it with couple of long drives which were being blocked by the CARA wall. I like Sadick because of his strong heart and I’m still asking myself why he did not take the rest of the penalties awarded Kotoko.

Kwame Boahene 7/10
Had a bit silent but impressive day. Who expected him to play a different role from where he had excelled all season? His dangerous moves from the flanks is what perhaps were missing from the Kotoko play. Struck the goal post, won a penalty and was very effective.

Baba Mahama 6/10
He saw a lot of play but contributed less than expected. Missed a penalty though but his general output is just above average.