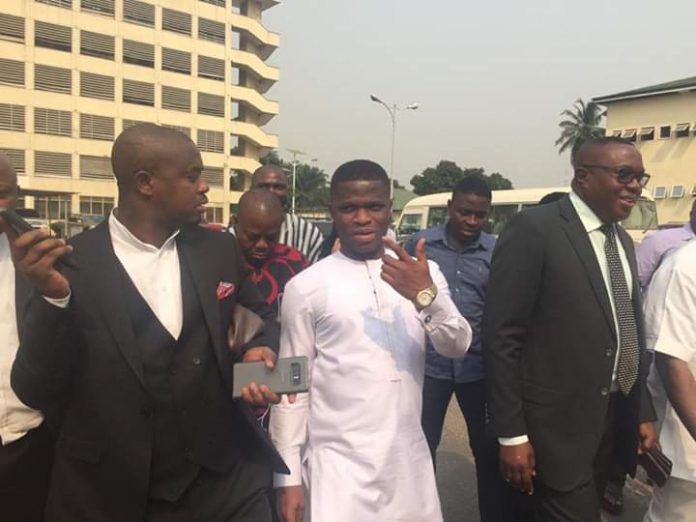 Information available indicates that Communications Director of the opposition National Democratic Congress, Sammy Gyamfi has been released after an earlier arrest by the BNI Monday morning.

Sammy Gyamfi was picked up by the officers at the premises of Despite Media, after making an appearance on UTV’s morning show.

The NDC member was whisked away by the officers in a pickup.

It will be recalled that in December last year, the Criminal Investigation Department of the Ghana Police Service extended an invitation to Sammy Gyamfi after a report was made against him by the Jubilee House on allegations of forgery and false publication.

Pertinent to that, the NDC communicator filed a lawsuit at the Accra High Court, demanding an injunction on an earlier court warrant by the Kaneshi District Court for the seizure of his electronic gadgets.

In a letter from his lawyers to the CID on December 23, 2019, Sammy Gyamfi refused to honour the CID invitation saying it could prejudice the court case.

“In as much as we wish to honour your invitation due to the respect we have for your institution, our client instructs us that we cannot honour your invitation due to change in circumstances which are that our client has filed an Application for the enforcement of his fundamental human rights at the High Court in relation to the matter being handled by your office and an application for interlocutory injunction which have both been served on you…

The decision to turn down your invitation is purely on the grounds that honouring your invitation especially when we have misgivings and concerns about how the whole matter has been handled which are a threat to the constitutional rights of our client will not only prejudice the matters before the court but also have the potential to render such matters moot which we are not prepared to do so due to the respect we have for the judicial authority of the High Court which we are enjoined including your institution to do so by the 1992 Constitution of Ghana.”

Meanwhile, National Chair of the party, Ofosu Ampofo has described the arrest as a diversionary tactic which they won’t fall for.