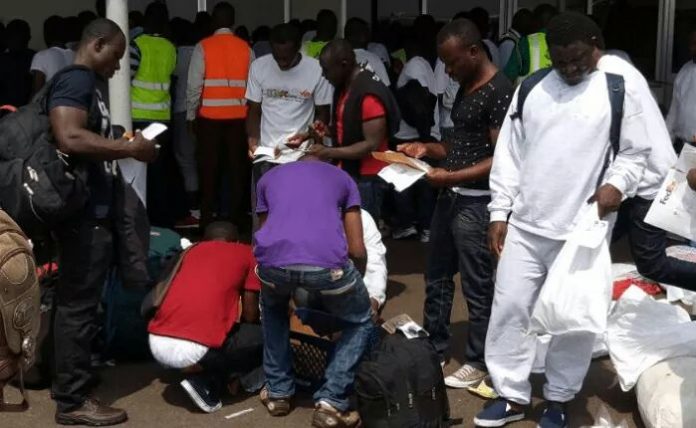 Team Ghana flew to the Gold Coast Australia Commonwealth Games full of hope. But the excitement of having a promising campaign seems to have died earlier than expected, in the wake of some depressing reports.

As usual, a Ghanaian Team may have to compensate for medals, with scandals.
The reports of some 50 Ghanaians being deported after trying to gain entry to Australia under the guise of covering the Commonwealth Games as journalists, has hit global news spaces.

The deportees, although in possession of genuine traveling documents, were arrested and detained after they failed to answer the sports-related questions which they should ordinarily be familiar with.
Australian officials suspect misrepresentation, deceit and forgery in acquiring the visas.

Atinka FM’s Saddick Adams, has done a comprehensive compilation of the timeline of events, culminating in the international ingominy;

⦁ The first batch of athletes and officials of Team Ghana departed Accra on the 12th March 2018 for Australia, to begin preparations for the games which started on April 4, 2018
⦁ The team was accompanied by a 49-technical team made of 22 coaches for all 12 disciplines, seven medical teams, four representatives each from the National Sports Authority (NSA) and the Ghana Olympic Committee (GOC) as well as the heads of the 12 sporting disciplines.

⦁ Team Ghana is led by Mohammed Sahnoon, the Chef de Mission for the 2018 Commonwealth Games, who is also President of the Ghana Cycling Federation (GCF).

⦁ On the 25th of March 2018, Ghana’s contingent at the 2018 Gold Coast Commonwealth Games finally moved to the Games Village after a successful 10-day pre-games camping. Ghana is officially lodging at the Sunset Apartments at the village.

⦁ Following the arrival of Team Ghana, some Ghanaian sports journalists also entered Australia with their valid accreditation cards. They have been granted due access to the Games Village and Media Centre to facilitate their coverage of the Games

⦁ It must be noted that, for the 2018 Gold Coast Commonwealth Games, a press accreditation is equivalent to an Australian Visa. Therefore, possessing a media accreditation is enough to grant one an entry into the country in lieu of traditional visas.

⦁ At 3:55pm on 30th March 2018, the Australian Border Force detained a group of Indian nationals claiming to be journalists sent to cover the Commonwealth Games. The group of nine, plus a leader, had arrived at the Brisbane Airport and had begun completing disembarkation forms. During interrogation by the Immigration, the Indian group appeared unscrupulous, raising suspicions of being “not genuine”.

⦁ At 4:20pm, they were all detained pending further questioning. One Rakesh Kumar Sharma, 46, was later arrested and appeared briefly in Brisbane Magistrates Court charged with people smuggling and falsifying documents. It’s alleged Sharma had a valid media credentials but had helped falsify the credentials of the rest of the group to get a visa that would allow them to stay in Australia. At this point, the suspicion had been raised

⦁ At 8:20pm local time, the same day, a contingent of over 18 Ghanaians, posing as journalists arrived at the Brisbane Airport. They were as usual taken through rigorous scrutiny. According to Australian Border Control officials, some of them couldn’t construct simple sentences in English whiles they had arrived without “basic journalism equipment”. 11 of them were detained with the remaining told to supply various forms of documents to authenticate their claims.

⦁ Whiles in detention, another group of 12 Ghanaians, “brandishing” press accreditation arrived with Ethiopia Airlines that had transited Indonesia. All nine appeared to be “fake” journalists and were detained after being probed.

⦁ Meanwhile, the very few Ghanaians who had provided some valid documentations recognizing them as journalists were asked to furnish Border Control with evidence of hotel booking, their recorders and laptops as well as a minimum $20,000 cash that would permit them to pass disembarkation. They failed to provide and thus had their visas cancelled.

⦁ At this point, the Australian Border Control had instructed their service men in known transit countries, especially Singapore to begin denying access to Ghanaian and Indians in possession of valid media accreditation.

⦁ On 31st April 2018, two Ghanaian “journalists” were detained in Singapore for nearly 48 hours. One of them, a known sports presenter in Kumasi was physically assaulted by the Indonesia Immigration before being locked up.

⦁ By 1st April 2018. more than 48 Ghanaians had been arrested at the Brisbane Airport in Australia, whiles a dozen of them were detained at various airports serving as transiting points to Australia.

⦁ By the 2nd of April 2018, over 26 of the Ghanaians had been processed for deportation to Accra.

⦁ The first batch of deportees arrived on the 3rd of April 2018. one of the deportees told Accra-based radio station, Atinka FM, that hed paid money to some officials of the Ghana Olympics Sports Committee and the Ministry of Sports to have their visas processed as journalists for the Games.

⦁ on 4th April 2018, The Ghana Youth & Sports Ministry promised to launch an full-scale investigation into the matter. The Deputy Minister of Youth and Sports, Pius Enam Hadzide, however denied the ministry’s alleged involvement in any visa deal.

⦁ 4th April 2018, Two Ghana Olympic Committee Officials, Christina Ashley (Gen Secretary of Ghana Volleyball), and Hussein Addy (Gen Secretary of Weightlifting), were sacked for their alleged involvement in the visa connections. The two are currently on their way to Ghana, this writer understands.

⦁ On Thursday April 5, The Ghana Journalists Association (GJA), issued a statement, insisting it does not know the reported 50 persons purporting to be Ghanaian journalists who were deported by Australian authorities. The GJA “For that reason, called on the Ministry of Foreign Affairs, the police and other relevant institutions to thoroughly investigate the matter in order to establish the true identities of the deportees for the purposes of redeeming the image of Ghana and Ghanaian journalists,” according to the statement.

⦁ Also, the Minority in Ghana’s Parliament, in a statement, called on President Nana Addo-Dankwa Akufo-Addo to, as a matter of urgency, initiate a probe into what they describe as an “embarrassment” to the nation.

⦁ CONFIRMATION: The Australian High Commission in Ghana has confirmed that ‘fake’ journalists who went for the ongoing Commonwealth Games from Ghana are due for deportation. “The Australian Border Force (ABF) has cancelled the visas of several dozen travellers from a variety of countries, including Ghana, who attempted to travel to Australia posing illegitimately as journalists, athletes or officials,” the embassy said in a statement on Thursday.

⦁ According to our sources, the Ghana Immigration Service have as well detained some Ghanaian deportees to assist in investigations.

⦁ Does Ghana have a history of this? YES. Coincidentally, in Australia. In July 2009, The Deaf Football Association of Australia invited the Ghana Deaf Team for an international friendly. Ghana travelled with a team of 39 persons to Australia. But upon their arrival, the Australians realized the Ghanaian “deaf team” could hear. Investigation conducted by the GNA Sports revealed that as many as 25 hearing persons were sent to Australia to represent Ghana instead of the non-hearing persons of the Association.

⦁ The Deaf Football Australia wrote to Ghana expressing shock, disappointed and disgusted. It therefore demanded USD 14,789.00 from Ghana, as refund of their expenses.

The latest deportation of “fake journalists” may open wounds, and as expected, trigger serious governmental action in order to bring an end to the recurring problem.