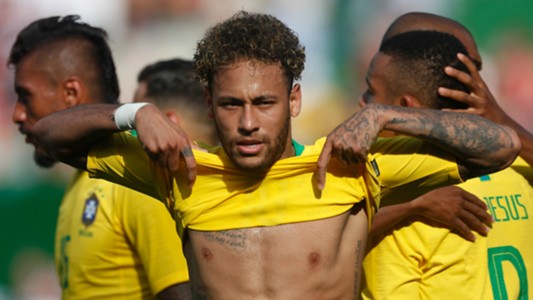 Neymar is not worth the €222 million (£200m/$262m) Paris Saint-Germain paid to sign him, the star himself says.
The Brazilian attacker became the most expensive player in football history when the Ligue 1 side paid the release clause to free him from Barcelona.

Neymar impressed in the French capital in his first year until an injury brought a premature end to his campaign.

The 26-year-old feels PSG paid over the odds for him, but says he has always wanted to be seen as a “special” player.
“I’m not proud of the transfer fee, nor of the fact I’m the most expensive player ever,” he told Spox .

“That’s just money and nothing else. I cannot help it. Personally, I would have paid less for myself.

“I always wanted to be special. That was my goal very early – actually from the moment I started playing football for a club. That was at the age of 11. It may sound clumsy, but from then on I’ve tried to get better every single day and get to my best.

“I really worked and sacrificed every day of my life to become a professional one day. That was the only dream I ever had. I dreamed of playing for Santos’s first team, being invited to the national team and one day going to Europe. It was not foreseeable at the time that I would succeed, but I kept thinking about it. There was nothing else for me.

“I’m proud that I’ve achieved my childhood goal. That was, and is, most important to me. As a player you always have to show who you are and assert yourself. Just referring to the transfer fee does not help you and says nothing about how good you really are.”

Brazil are hoping for a more successful World Cup campaign this year after crashing out at the semi-finals in 2014 with a 7-1 loss to Germany.
Neymar missed that match four years ago due to a back injury, but still feels the hunger for revenge heading into the tournament in Russia .

“I felt as beaten as the team was and was affected like everyone else,” he said. “The expectations on us in our own country were almost inhumanly high and Germany are an excellent opponent.

“We knew it would be hard. Unfortunately, it went as it did. Now we finally have the opportunity to wipe out the last World Cup. Maybe we will meet Germany again – and then hopefully we will have a real revenge.”